Earlier this month, the Norwalk Daily Voice published a study that was released by WalletHub finding Connecticut has the most expensive energy costs of all 50 U.S. states.

TTD is often asked how our rates compare to that of other electric providers. In our efforts to proactively communicate to our rate payers, we included a rate comparison in our January/February 2016 Newsletter, which demonstrated the competitiveness of our costs for a residential customer as compared to that of an Eversource residential customer who falls into the “Rate 1” category.

Rates are impacted by many factors and can fluctuate continuously. Our commitment to providing reliable, low-cost electricity is unwavering and our participation in CMEEC (Connecticut Municipal Electric Energy Cooperative) allows us to distribute power to local homes and businesses at some of the lowest prices in Connecticut. 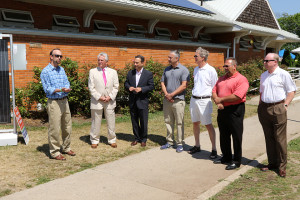 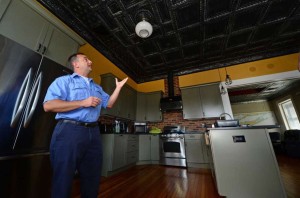 NORWALK — With its original tin ceiling, lamp once carried aboard a horse-drawn fire wagon and new kitchen, bunkhouse and bathrooms, the East Norwalk Fire Station is the pride and joy of Engine 3.

For much of the last two years, Engine 3 firefighters have put their carpentry and other skills into renovating the century-old fire station at 56 Van Zant St. in East Norwalk.

And with the finishing of the new bathroom, work on the second floor is largely complete.

“The bathroom was really the last thing they got done, two to three weeks ago,” said Fire Capt. Jonathan Maggio, pointing out the changes. “This was all covered up with plastic. Those windows were actually bricked in behind the wall. Why not make use of the natural light?”

In addition to exposing the original brick wall, the firefighter handymen installed a new sink, urinal and floor tiling that resemble what were in place when the firehouse was built in the late 1890s.

“Even the plumbing, we went with cast iron and copper rather than PVC because it’s going to be exposed and it will look similar what’s typical for its age,” Maggio said. “Everything came out nice.”

Maggio credits firefighter Lefty (Elefterios) Petrides for initiating restoration of the historic firehouse, drawing upon the skills of its occupants. The firefighters, for example, removed the drop ceiling to expose and carefully restore the original tin ceiling that was installed in the late 19th century.

Other work, such electrical systems and asbestos abatement, required the hiring of contractors whom Maggio also thanks for their contributions.

“We put the kitchen up front because guys end up coming in earlier,” said Firefighter Rob Huebner. “If guys get here at 6:30, they can make a pot of coffee and relax.”

Meanwhile, the bunk area was moved to the back and the center area is now a lounge with a modern office off to the side. The fireman’s pole, previously in the corner, is now at the back of the kitchen — a more practical location for firefighters to hurry to their vehicles.

Fire Chief Larry Reilly said the project required careful staging as firefighters lived in one area as work proceed in another part of the building.

Economics also played a role in the project.

The firehouse is owned by the Third Taxing District and operated by the city of Norwalk. The district kicked in approximately $70,000 and the city $100,000 toward the renovation work. Having the firefighters volunteer their labor allowed the available dollars to go farther in terms of quality of materials, Maggio said.

James W. Smith, Taxing District general manager, described the district’s partnership with the firefighters as favorable for both parties.

“The good thing was we did it in partnership with them, because they did it over time, which didn’t really produce a financial burden for us to fund some of these improvements,” Smith said. “It really worked out well.”

“The fact that they did so much work themselves makes our job as commissioners a lot easier,” Brown said.

Maggio said the first-floor renovation work will entail, among other things, the placement of historic pictures depicting the history of the firehouse.

Sixteen firefighters work out of the station, which is also home to the Norwalk Fire Department’s Marine Unit 238.

At the end of the day, restoration of the station is a home improvement project.

“We’re proud of this station,” Maggio said. “This is more like a home away from home. We spend probably half our life in this building.”