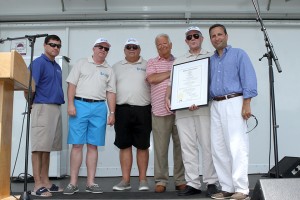 At the kick-off festivities, Mayor Richard Moccia and State Senator Bob Duff were on-hand to congratulate the district on their 100 years of servicing residents and businesses of East Norwalk, and TTD Commissioners David Brown and Charles Yost, along with Jim Smith, General Manager and Ron Scofield, Assistant General Manager, unveiled TTD’s new logo and website to applause from the crowd. As part of the celebration, Senator Duff presented a Citation from the State of Connecticut in honor of TTD’s role in the East Norwalk community over the last 100 years.

Attendees were treated to performances by Norwalk Academy of Dance, Suzuki School (T.E.S.S.), Tracy DeLucia, Suit, Ty & Thurrsty, and Déjà vu throughout the day and into the late evening. Families enjoyed the large Touch-A-Truck area which included Third Taxing District utility trucks, a Norwalk Police Department S.W.A.T. vehicle and motorcycles, an East Norwalk Fire Engine, and a truck from Eaton Corporation, the premier sponsor of the event. There was also an interactive water safety presentation by Stew Leonards’ Stewie the Duck, exhibits from Eaton Corporation, CMEEC and other local businesses, face painting, and numerous raffles and giveaways on-site.