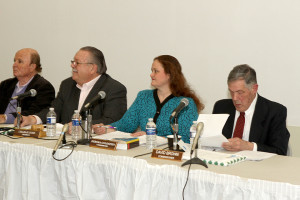 TTD Commissioner Debora Goldstein presented an industry and legislative update, including information about municipal bonds and TTD’s partnership with CMEEC.

“We are committed as ever to putting your needs first,” said Goldstein, in reference to TTD’s pro-active approach to understanding changes within the industry. “We watch the industry closely, and work hard to advocate on your behalf.”

“TTD continues to be in solid financial condition even after the construction of the Fitch Street Substation/Cervalis Projects,” commented Smith.

Smith also presented initial results of a recent Customer Service Survey, in which TTD ranked within the top 10% of all public utilities in the country, with reliability, employees and loyalty with particularly high rankings. Additional information about the survey results will be made available in the coming weeks on the TTD website, ttd.gov.

Some other highlights of the past year included TTD’s donation of a vehicle to JM Wright Technical School, installation of EV Chargers at the East Norwalk Association Library and the on-going progression of the LED Streetlight project.

Major projects on the horizon for TTD include the installation of a T1 transformer on East Avenue, which will be completed within the next 4-6 weeks. This installation will help to increase reliability by evenly distributing loads across the district. In addition, the TTD-owned property at 18 Rowan Street will be converted into a material storage facility, allowing TTD to consolidate materials and increase efficiency.

In response to a ratepayer inquiry about the use of solar by residents in the district, Smith reminded ratepayers that federal tax incentives for solar projects will end in 2016, and TTD welcomes questions about solar options for customers. 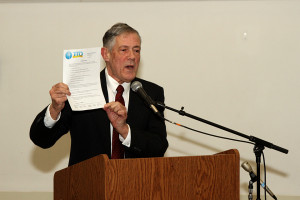 Commissioner David Brown presented the District Budget for review and approval by the electors of the Third Taxing District. The group talked about plans for the East Norwalk Association Library, based on the earmarked funds for a third-party master plan. Commissioner Charlie Yost stressed the importance of having a committee of stakeholders involved in any discussion and decision-making regarding the East Norwalk Association Library.
After a spirited discussion between the Commissioners and ratepayers, the district budget was approved with minor changes.

The next TTD Commission Meeting is scheduled for Monday, April 6th at 7:00pm.

About TTD
TTD operates a municipal, ratepayer-owned Electric Department that provides high service, reliable, low-cost electricity to East Norwalk residents and businesses. The company also supports the local community with concerts and holiday events, as well as supporting the East Norwalk Association Library and Norwalk Fire Department Firehouse, and maintaining the East Norwalk Historical Cemetery. The Third Taxing District is governed by a Board of three Commissioners and a Treasurer. The commissioners are elected by the residents to six-year terms. The Treasurer is elected for a two-year term. The Commissioners’ terms of office are staggered so that every two years one commissioner is up for election.